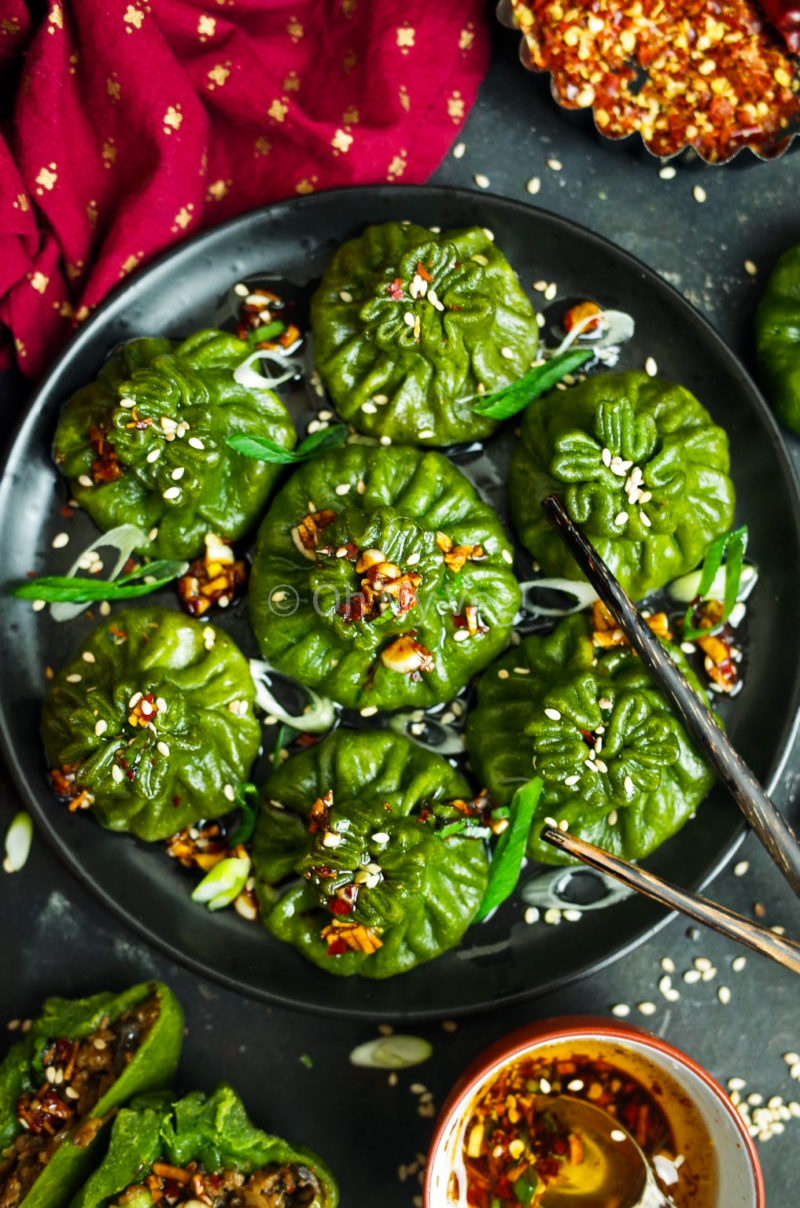 It’s lovely to meet you! I couldn’t be more excited that you’ve found my little corner of the internet here at Oh My Veg. This is a place of refuge for all like-minded foodies and home cooks looking for vegan & vegetarian recipes which will nourish the body, soul and heart. Let’s make some incredible food together!
Jump to Recipe

Dumplings! They’re popular all over the world – and whether they come in the shape of Gyoza, Potstickers, Momos, Wontons or Mandu, these appetisers are insanely delicious. This spinach dumpling recipe, though, is like nothing you’ve tasted before and you certainly won’t be able to find them at your local take-out …

Introducing spinach, mushroom and soy chunk dumplings: Homemade dumpling wrappers that are fresh, chewy, and vibrant green from a spinach infusion. Stuffed to the brim with a filling that is equally unctuous, umami, meaty, peppery and protein packed (while being vegan!) Made with the delicious and unconventional combination of mushrooms with soy chunks, this is sure to be a flavour combination you won’t forget anytime soon.

Don’t be scared by the soy chunks. They have a flavour reminiscent of chicken and a chewiness that perfectly suits the soft tenderness of mushrooms.

This show-stopper of a recipe is a delight to the eyes and a party in the mouth.

This recipe is naturally Vegan, Vegetarian, and Nut Free.

To make Spinach Dumplings Soy Free, use Tamari, Liquid Aminos or Gluten Free Soy Sauce instead of regular Soy Sauce. Instead of Soy Chunks you can use Seitan, although this will not be gluten free. Alternatively, up the quantity of mushrooms and avoid meat substitutes altogether.

To make Spinach Dumplings Gluten Free, you’ll have to use either a Gluten Free Flour or a combination of Rice Flour, Psyllium Husk and Tapioca Starch for the spinach momo wrappers. For the filling, you simply need to substitute ordinary Soy Sauce with either Tamari, Liquid Aminos, or Gluten Free Soy Sauce.

Tips for the best Spinach Dumplings

For more Vegan recipes, why not check out Gobi 65, a South Indian battered cauliflower recipe which is tempered with curry leaves, ginger, and dried red chillis; Batata Rassa, a Maharashtrian thin and spicy Potato curry; Bhindi Masala, a simple dry sabji made with Okra which even sceptics will love or Hummus, a simple Middle Eastern dip made with chickpeas, garlic, lemon and tahini.

Did you make this recipe?

How to serve Spinach Dumplings

Serve hot and fresh from the steamer – or go on to further cook the dumplings as suggested above by either pan frying or deep frying. Either is delicious! Once you’ve cooked to your preferred method, top with an umami, sweet, sour and spicy dipping sauce. I simply like to combine sesame oil, soy sauce, garlic, chilli flakes, a dash of rice vinegar and an optional pinch of either brown sugar, agave syrup or honey in a small bowl. Once mixed, heat through until just warm and then pour over the freshly made dumplings. Garnish with sesame seeds and spring onions and then tuck in!

Instead of the hot chilli oil, you can serve a traditional tomato chutney alongside the dumplings – just like they do across Tibet, Nepal, and India.

If you would rather serve Spinach dumplings as part of a larger meal, I recommend serving it alongside some Asian dishes. Indo-Chinese Vegan Chilli Tofu would be great – a spicy stir fry made with fresh Tofu, Bell Peppers and Onions in a sticky sauce. It’s an Indian street food classic so pairs beautifully with spinach dumplings. If you’re fancying noodles, why not try an authentic and Vegan Pad Thai with Vegetables and Tofu?

For a real feast, include Indo Chinese Gobi Manchurian and Vegetable Spring Rolls in the mix too.